I’ve been processing a lot of messages through Azure Service Bus lately. During that processing I encountered a situation where Azure Management Portal reported that there were over 97 thousand messages in the queue but still the worker weren’t receiving any messages. 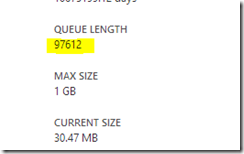 Here’s a code snippet for creating a QueueClient for the DLQ, from a previously created QueueClient: